While at one point, women wearing Reebok 1980s sneakers was scene as a crime against fashion at work, today, the identical pair shoes are all the rage.  As seen in the 1988 film “Working Girl”, the protagonist Tess, frantically scrambles to take off her sneakers and put on her heels before her bosses enter the room. Today however, Tess, and every other women in the office, might not even feel the need to change their shoes at all. Some call it the “Zuckerberg Effect”: the casual wardrobe, consisting of grey t-shirts and jeans, of Facebook’s CEO has trickled down to offices of all types. While law and finance firms remain more buttoned up, there have been many challengers to the traditional, pump wearing status quo. When looking in the streets of major cities like New York City, perhaps due to the lack of a dress shoe requirement, it is safe to say that anything goes now.

Over the past few years, the comfortable shoe has mattered just as much to the runway as it does to women like Tess. Causing many editors to question Gucci’s best-selling fur lined Princetown slipper,  “Is Fall’s Hottest Shoe a Status Symbol- Or a Crime Against Fashion?” or try to explain “Why Spring 2018 Will Win the Ugly Shoe Race”, the trend has definitely disrupted the fashion industry. More importantly, however, it has brought up discussions about shifting beauty standards, allowing people to wonder why a flat, comfortable shoe has to be deemed as ugly.

One designer who has taken charge in this fashion revolution is Balenciaga’s Demna Gvasalia. Speaking about his “ugly” shoes, he has said, “I think it’s very interesting the definition of ugly. I think it’s also very interesting to find this line where ugly becomes beautiful or where beautiful becomes ugly. That’s a challenge I like. I think that’s a part of what fashion stands for and I like that people think my clothes are ugly; I think it’s a complement.” Balenciaga’s platform Crocs shocked everyone as it strutted it’s way down the fashion week runway, so newsworthy BBC news in the UK covered it. Who would have ever guessed that the shoe once seen as a joke would be worth one billion dollars today? Carolyn Mair, a professor of Psychology of Fashion hypothesizes   that the success of the shoe is due to the imagination behind the shoe. “Psychologists have established that we don’t pay attention to what’s ‘normal, usual, or familiar, because it presents no danger,” she explains.  “However, when we encounter something novel, attention is drawn to it. So, in addition to the comfort and utilitarian value of these shoes, perhaps it is the desire for attention that motivates the wearer.”

In addition to it’s Crocs, Balenciaga’s ironically cool triple soled sneakers  known to resemble what society calls “dad shoes” -crafted using molds taken from running, basketball, and track shoes- have had uninterrupted success since being released. The orthopedic looking sneakers sold out within in an hour on Stylebop.com. Similarly, the Vetements x Reebok sneakers sold out almost instantly; the Vetements x Manolo Blahnik crotch skimming boots-complete with a stiletto heel- did not. The continuing success of Birkenstock is also proof that the ugly, yet comfortable footwear trend is major, as it’s revenues have tripled since 2012. The brand can thank it’s change of fate from being hopelessly dowdy shoes to one the most desired shoes the world, to Phoebe Philo’s interpretation at Celine in 2011.

Now that luxury brands have collaborated with Crocs, who knows what the fashion industry will do next, but one thing is known: the power of ugly combined with function cannot be underestimated. “It’s almost a badge of honor, taking something from the fringes of fashion raising it to the height of style, says Coco Chan, womenswear director at Stylebop. “It’s the essence of cool, and in the age of social media, that’s a very powerful thing.” 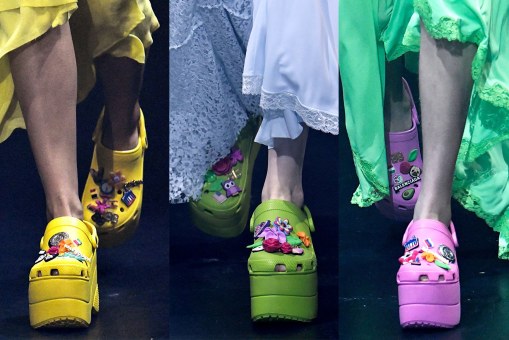 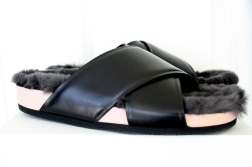